Positive Tomorrows, Oklahoma’s only elementary school specifically serving homeless children, recently broke ground on a new facility and announced it has met its Building Success Campaign goal of $10.2 million raised from the community. An additional $5 million received in New Market Tax Credits will bring the final project total to $15 million. The new facility will more than double the school’s capacity and expand grade levels served.

The new facility, located at 901. N. Villa, will be over 30,000 sq. ft. and will have space to serve students ages birth through 8th grade. It will include a gymnasium, open commons area, library, spaces for art and music, a special education classroom, and a storm shelter. Positive Tomorrows plans to move into the facility and begin school in Fall of 2019. 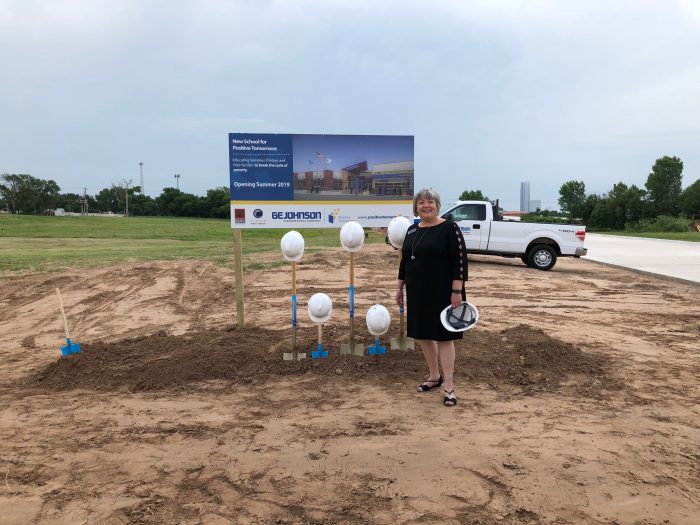 “In a city reporting over 9,000 homeless children, we feel a responsibility to serve more students,” said Susan Agel, Positive Tomorrows President and Principal. “We are thrilled to take this step forward today, and to move toward serving more of our community’s most vulnerable children.”

Naming opportunities including bricks ($250) and cubbies ($500) are still available for purchase in the new facility. To learn more, visit www.PositiveTomorrows.org/Building-Success.

Rain did not stop the event from taking place inside Northcare’s facility next door, where donors, board members, volunteers and community supporters gathered for photos and remarks about the new facility.

Learn more about the campaign today!